This post is brought to you by Divina P. Divina is one of our many dedicated Rouxbe users, aside from other posts and what not, she has also contributed many delicious recipes to the test kitchen. She has now started her own blog called Sense and Serendipity. 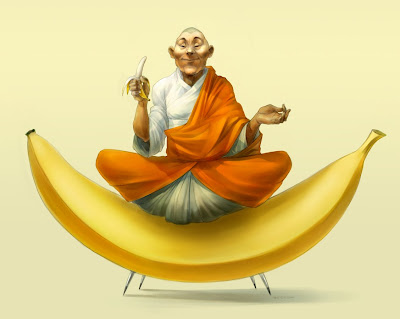 (image from The Thinking Blog – 20 Fascinating Facts About Bananas)

Bananas are the least expensive and most popular fruit on the market. They are one of the fruits that are better ripened off the tree. They are available all-year round in tropical countries where they offer more diversity.

Bananas are packed with nourishing nutrients, particularly the mineral potassium and understandably one of the most popular energy-booster because ripe bananas are easy to digest and most of the starch has been converted into sugar. The sugar combined with fiber makes bananas so good for a substantial released of energy.

The fructo-oligosaccharides in bananas help feed good bacteria in the gut. They are beneficial to the digestive tract, soothing and helping to restore normal function after constipation or diarrhea. In fact, in Southeast Asia, people eat a certain type of banana that treats either constipation or diarrhea. The pectin fiber helps soothe heartburn, ulcers and inflammation of the digestive tract. They also contain vitamin B6 and tryptophan, which the body converts to serotonin ? a hormone that helps lift moods and promote sleep. 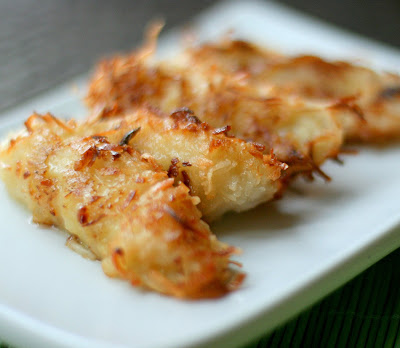 Store bananas at room temperature and once they are ripe, they can be refrigerated for up to two weeks. Their skins will turn black but the flesh will still remain firm. Bananas ripen quickly because they release a high concentration of ethylene gas in the process of ripening. Be careful though, some bananas are treated with ethylene gas.

You can do a lot more with bananas than eat them. You can definitely cook with them for desserts and in savory dishes. You can even use the banana peel for mosquito bites by simply rubbing the affected are with the inside of a banana skin. This will reduce swelling and irritation. And, did you know that in Eastern Africa, you can buy banana beer (the beer is brewed from bananas)?

Thanks for the great article Divina…good luck with your new blog!

p.s. What’s your favorite banana recipe or dish? I have to say I am a sucker for deepfried bananas…like the ones above…maybe even with some ice cream and chocolate sauce. Yum!

Is it Cilantro, or is it Coriander?

There?s a debate whether this herb is called cilantro or coriander.

Depending on where you come from, this herb is either cilantro or coriander. Coriander, which is often referred to as coriander leaves in Great Britain, is also known as Arab, Chinese or Mexican parsley in France. In the United States and other parts of the world, it is called cilantro, the Spanish word for coriander leaves. Confused yet?

The coriander plant produces both leaves and seeds. The leaves are usually called cilantro while the seeds are called coriander seeds. To add confusion, some people call the seeds, cilantro. This plant is related to the carrot and parsley family. The flavors of the seeds and the leaves have no resemblance to each other.

Cilantro is considered a digestive aid, which stimulates the appetite and aids in the secretion of gastric juices. It also releases heat (fever) from the body.

I used to hate cilantro because of its extremely pungent odor and flavor. Interestingly, some people even have an enzyme in their saliva that makes cilantro taste like soap. It seems that you either love it, or hate it. I know, “hate” is a strong word to use but there are cilantro haters out there that exist. Are you one of them?

There?s even a website solely dedicated for the fight against cilantro.

Bobby Flay used to say, ?If you don?t like cilantro, try it again.? The herb blends itself well to highly seasoned food, yet still enables most dishes to retain their strong characteristics and individuality. As one of the most versatile herbs used in many different cuisines, I agree that cilantro or coriander leaves deserve a second chance.

Here are a couple recipes, if you’d like to re-introduce yourself to the wonderful flavor of cilantro and or coriander. This first one is Lemon Cilantro Roasted Chicken. This next one is for Lemon Coriander Prawns (which also just happens to be my first Rouxbe video recipe :-)

When American Idol winner David Cook performed recently on stage playing his guitar and singing his high notes, it gave me goose bumps. It?s the same thing with food. A memorable and unforgettable meal or dish could give you that bristling feeling on your skin where your hair stands up. These are the kinds of food that make you go mmmm. These are your sexy foods.

Sexy foods can mean a lot of things to different people. It could be the sizzling sound of scallops in hot melted butter or a perfectly cooked medium-rare steak. It could be the variety of colors of fruits and vegetables on display in your local market or the flavors that you slurp up in a steamy bowl of wild mushroom cream soup. These are your outside factors. What happens on the inside is a different story. These sexy foods can adversely affect your hormones, glands and organs.

Whatever your own definition of sexy foods is, you need to start engaging your senses when you cook, as well as when you eat. The sights, smells, tastes, textures and sounds you experience will infiltrate your brain, creating an important culinary memory. Our memory of likes and dislikes about food can help us create and develop our skills as a cook. Being mindful about your senses takes a lot of practice at first, but sooner or later it will become second nature.

Connecting ourselves to what we?re eating, and discovering the different tastes of sweet, sour, bitter salty and even umami is a great outcome to our senses. Was it slippery or chewy, cold or hot? Did it smell good? What did it look like and sound like?

Asking ourselves these questions makes us more sensitive to foods and their flavors and is the first step to becoming a more refined cook. Start paying attention.

So, what are your sexy foods and why?